I’ve always had an irrational fear of Nutella, and I’m not entirely sure why. Perhaps it originated from my deep love of peanut butter; I was scared to venture into a relationship with a different spread. But this Pioneer Woman recipe for Nutella Rice Krispies won me over, and now I’m pro-Nutella.

Seriously, I never would have considered Nutella as a pantry item. But The Pioneer Woman put out a new cookbook*, so I was super excited and ready to try new things… and I’m so glad that I did. I made a pan of these Nutella Krispie Treats for my husband’s office and his co-workers went crazy for them. I promised them I would blog the recipe, so here it is… Keep reading for the full, step-by-step, recipe;

INSTRUCTIONS:
Begin by buttering the inside of a cake pan; a 9 x 13-inch pan works best… Butter the pan generously.

Melt 4 tablespoons of the butter in a large pot or saucepan over medium-low heat.

Once the butter has melted, add the 10 ounces of large marshmallows to the pot…

… then add the 1/8th teaspoon of kosher salt. This is a super sweet recipe, the salt helps balance that factor out a little. 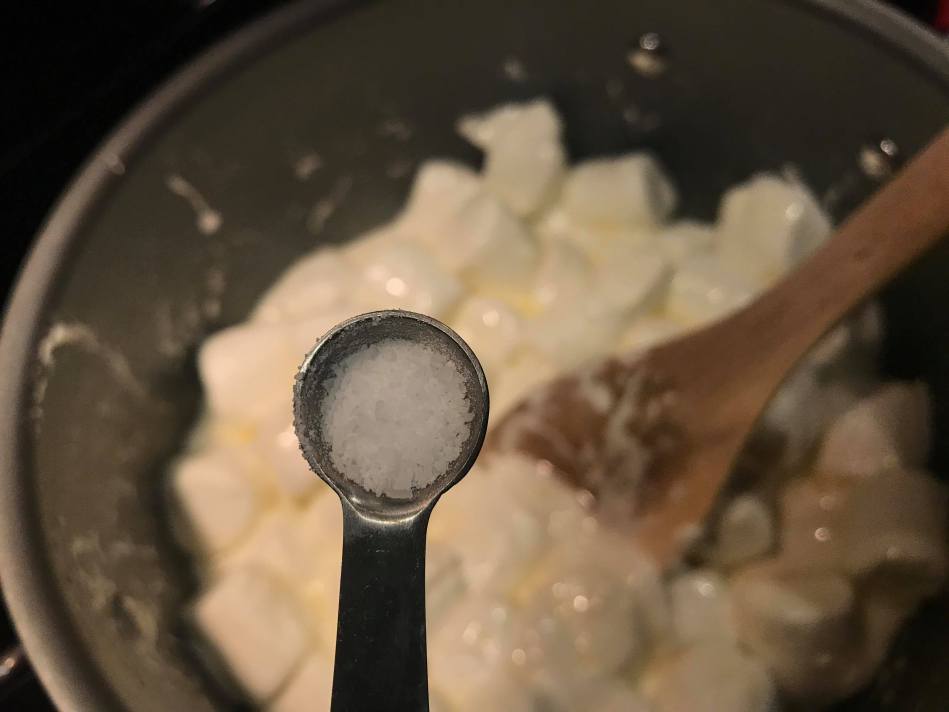 The marshmallows will begin getting melty, and gooey, and then meltier, and gooier… Just stir and enjoy the melted gooeyness.

Keep stirring until the marshmallows are completely melted… 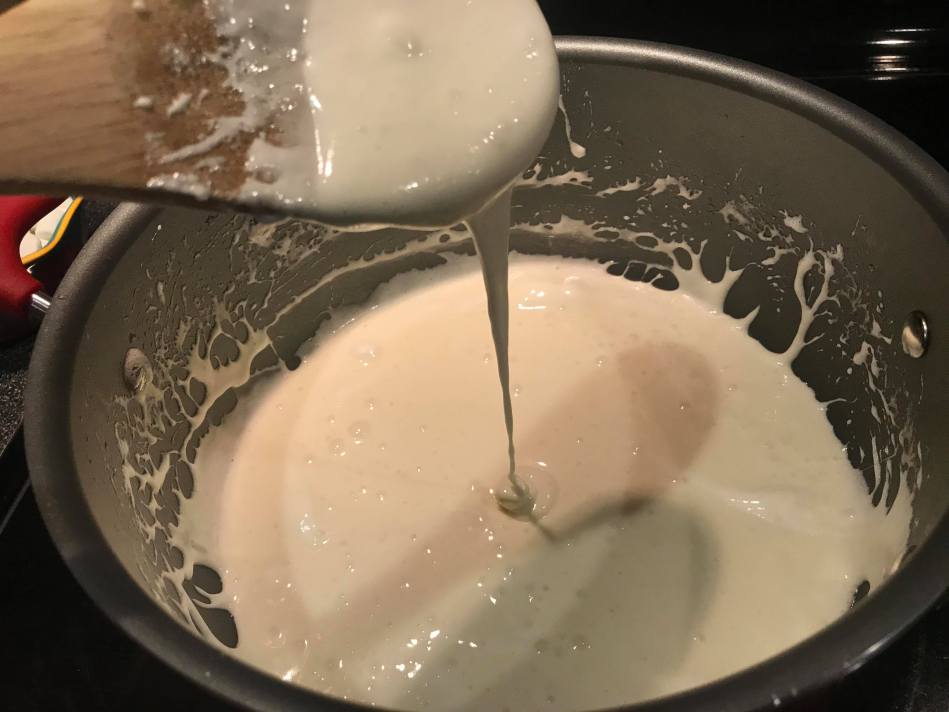 … and then add the 1/3 cup of Nutella to the melted marshmallow mixture. 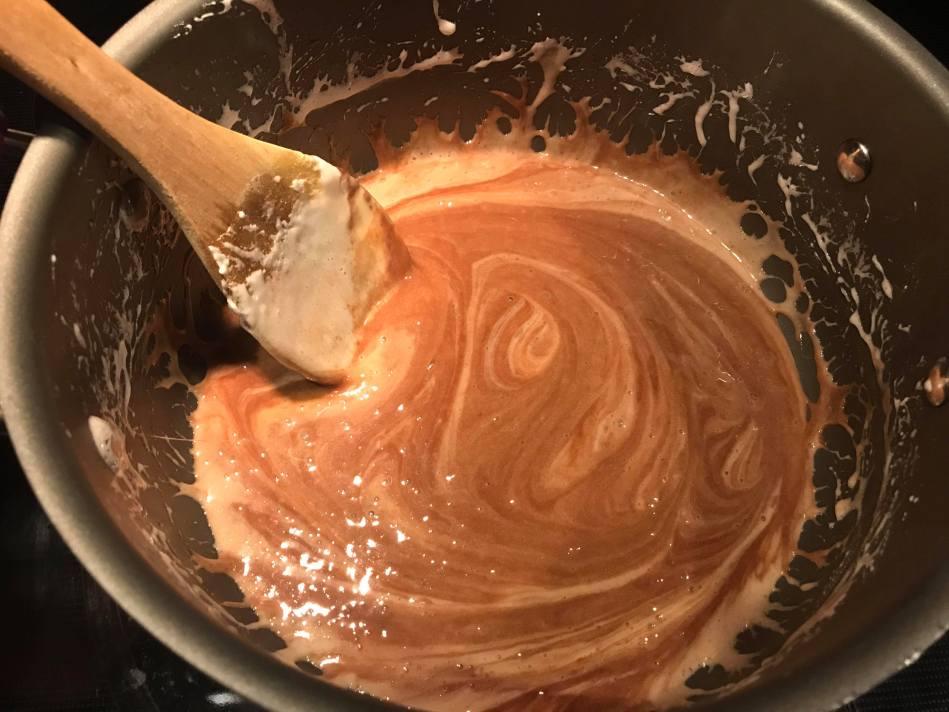 Once the Nutella is well combined, add the remaining 2 tablespoons of butter to the pot and stir until the mixture is smooth. 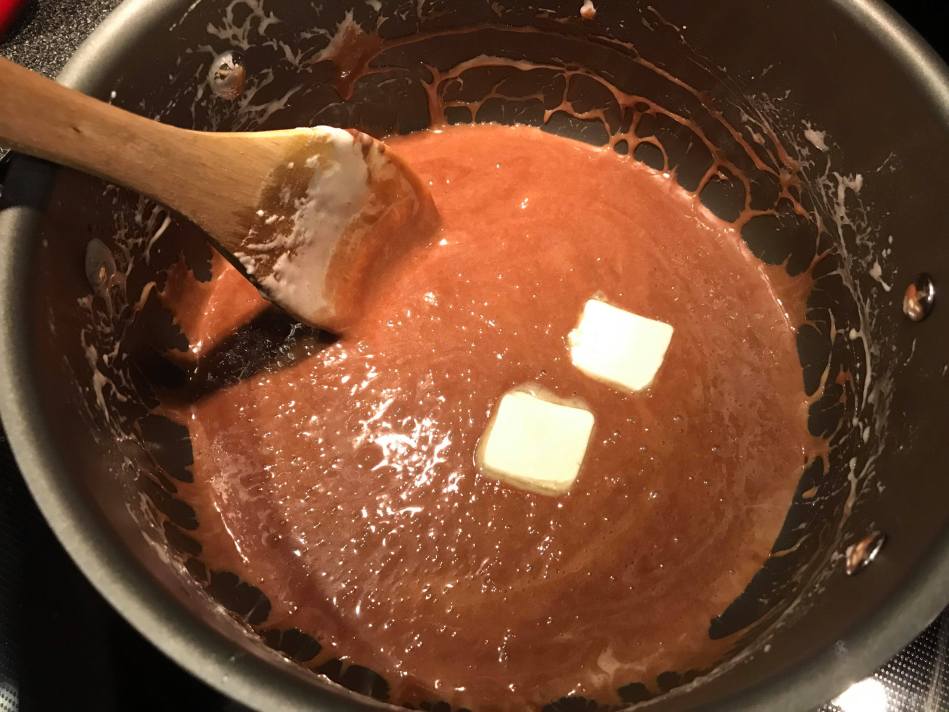 The next few steps need to happen hastily. Once the marshmallow mixture is taken off the heat it will begin to cool, quickly, which will make it hard to mold and minipulate. This is your official “move quickly” warning.

So, go ahead and measure 6 cups of Rice Krispie Cereal into a large bowl that has plenty of extra room. Pour the Nutella mixture on top of the Rice Krispies, and IMMEDIATELY begin folding the concoction together… 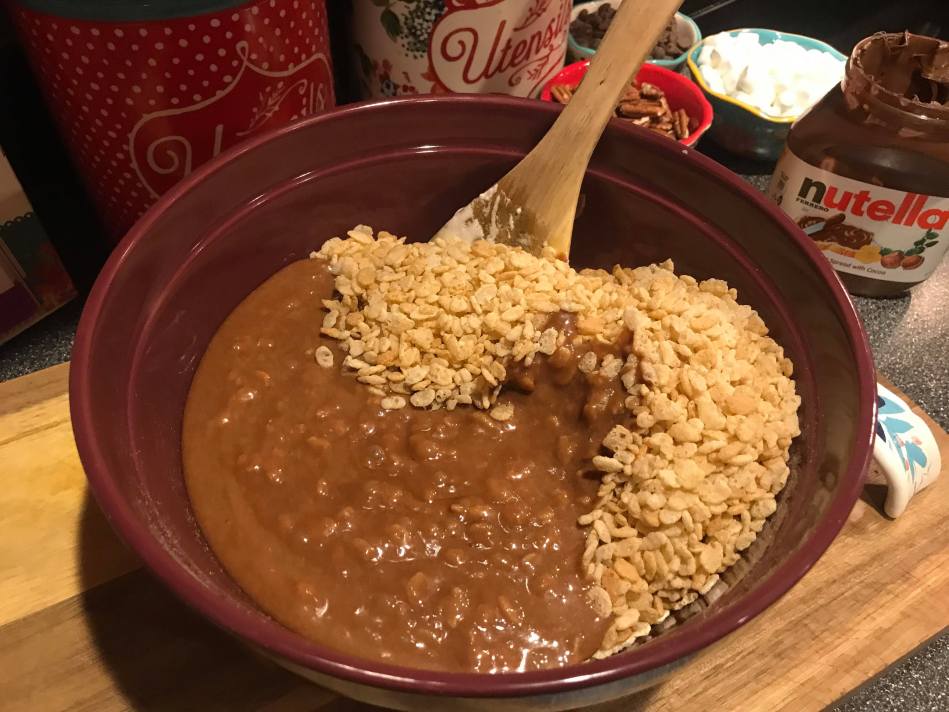 … and immediately begin dumping the mixture into the pre-buttered pan. It will be sticky, and lumpy, and a tad bit difficult, but you can handle it. Feel free to use your hands. Hack: cover your palms with butter or cooking spray to keep the Krispies from sticking to you.

*Thank you to my husband, for snapping this “culinary action-shot” for me. 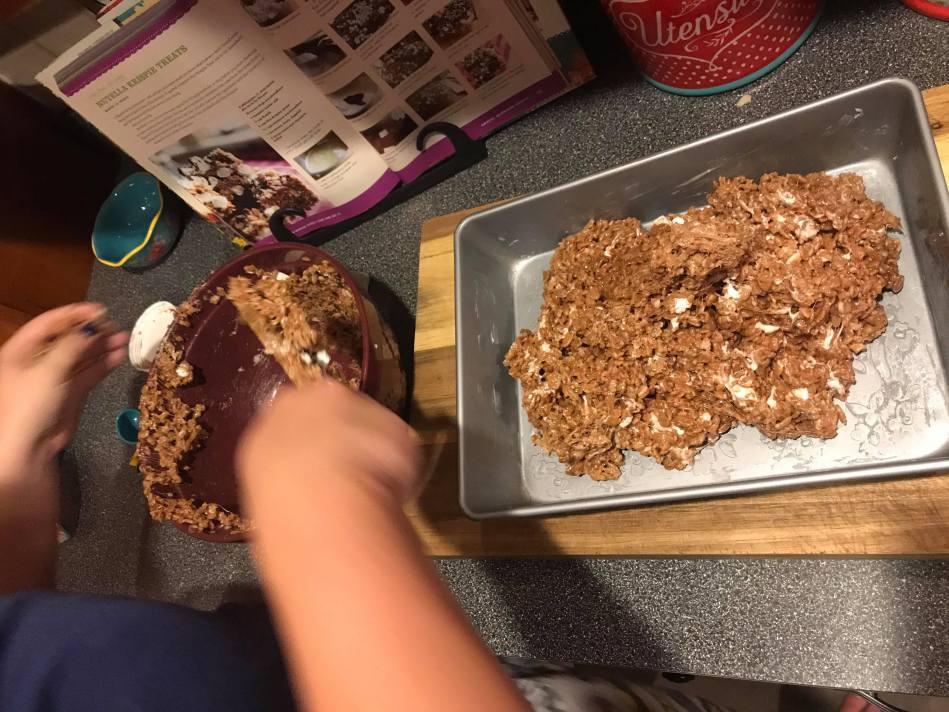 … and, quickly, press the mixture into the pan, shaping it. 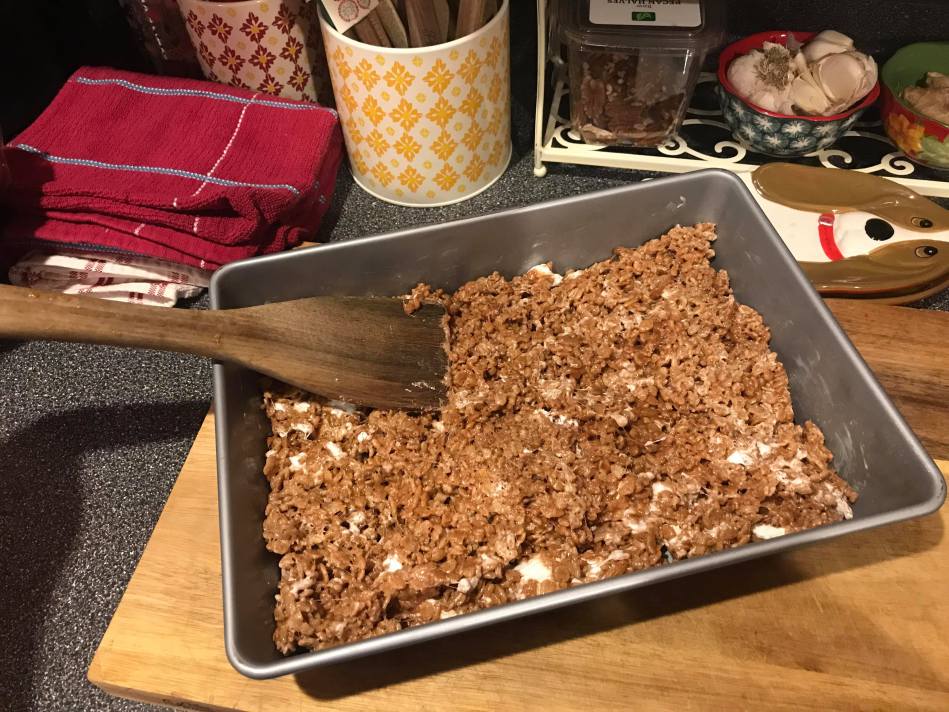 Chop the 1 cup of pecans; it’s absolutely okay to use pre-chopped pecans.

Now, melt the chocolate according to package directions.

*In case the package doest have melting directions – Melting Chocolate in the Microwave: Place the chocolate in a microwave safe bowl. Heat it on medium-high for 1 minute. Carefully (the bowl will be hot) remove the bowl from the microwave and stir the chocolate. Repeat the microwave process, but for shorter heating intervals; 15 to 20 seconds, always stirring in between. Continue until the chocolate is at a desired consistency; aka. thin and glorious. 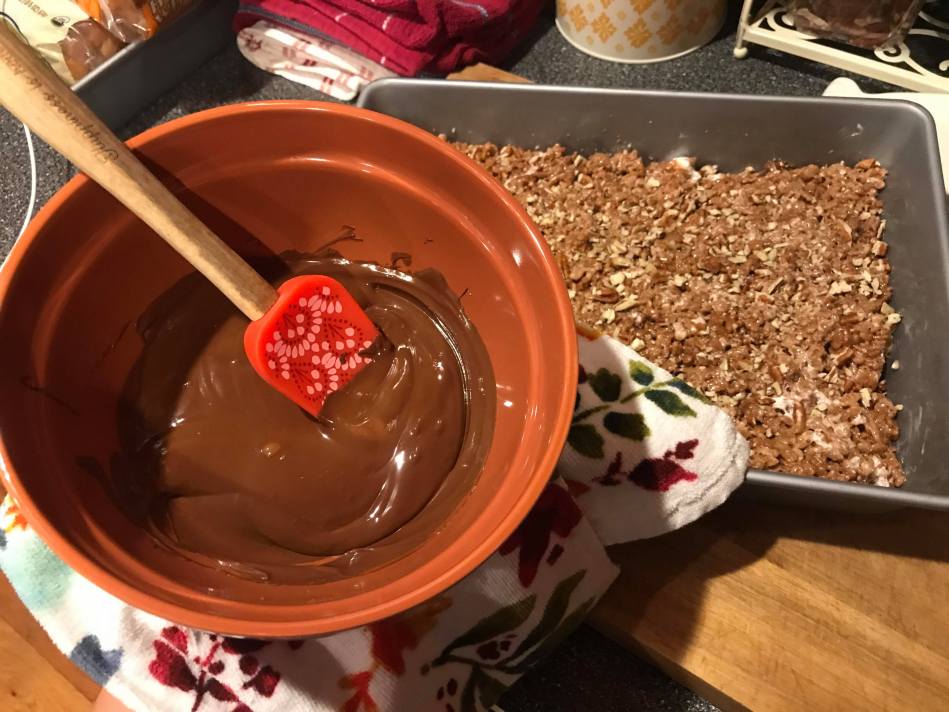 … and drizzle the melted chocolate all over the top of the krispy treats and pecans.

And, sprinkle the remaining chopped pecans on top of the melted chocolate.

Now, you need to let the pan sit until the chocolate has hardened and the Rice Krispie mixture has completely cooled… If you want to speed up the process you can pop the pan in the fridge. However, I just let the pan sit on the countertop for a few hours until it cools.

Once it has cooled and hardened, begin cutting the treats into squares… 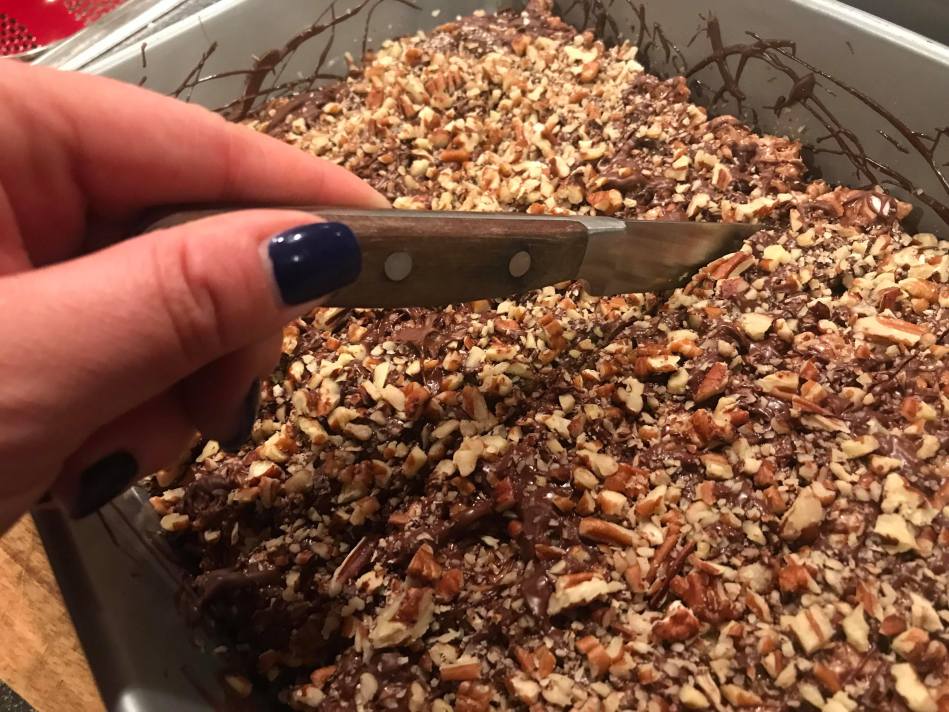 …and remove them from the pan. They should remove easily; YAY BUTTER!

These also travel really well. Just put the cut Nutella Krispie Treats in a pan, and cover the pan with foil (or a lid), and you’re good to go! Literally, good “To-Go”!

*This is a Make-Ahead Sweets Meal from The Pioneer Woman’s Cookbook; COME and GET IT!