Can you imagine Crispy Pork Chops and Gravy for under 335 calories? It sounds too good to be true. But it’s true.

This recipe is strictly based on Brooke Griffin’s recipe for Country Pork Chops and Gravy, from her cookbook, SKINNY SUPPERS*. 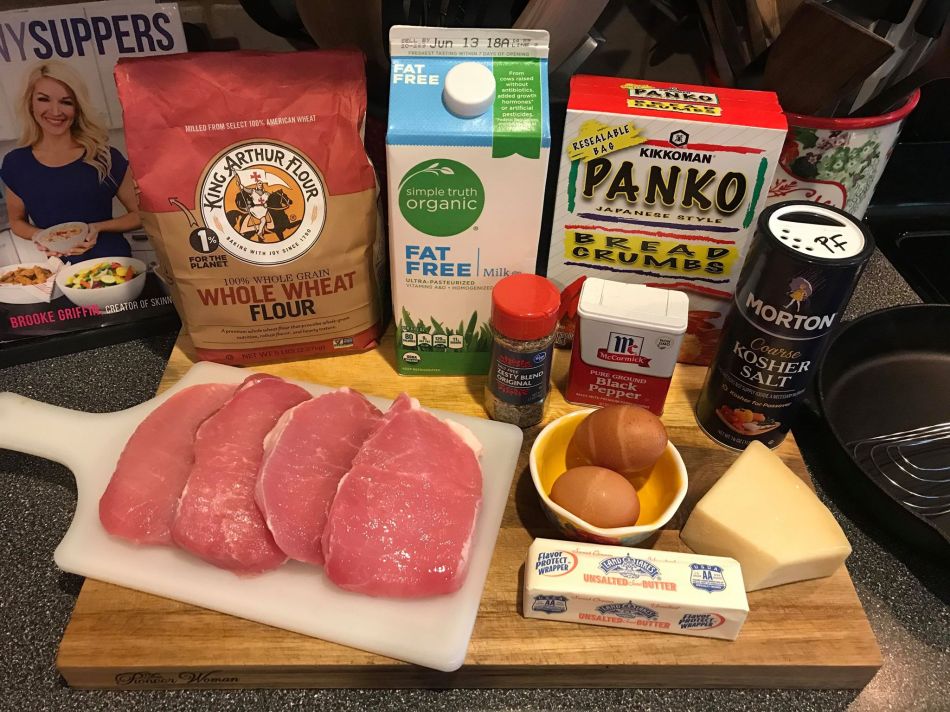 Instructions:
Coat a baking pan generously with cooking spray, and preheat the oven to 400 degrees. 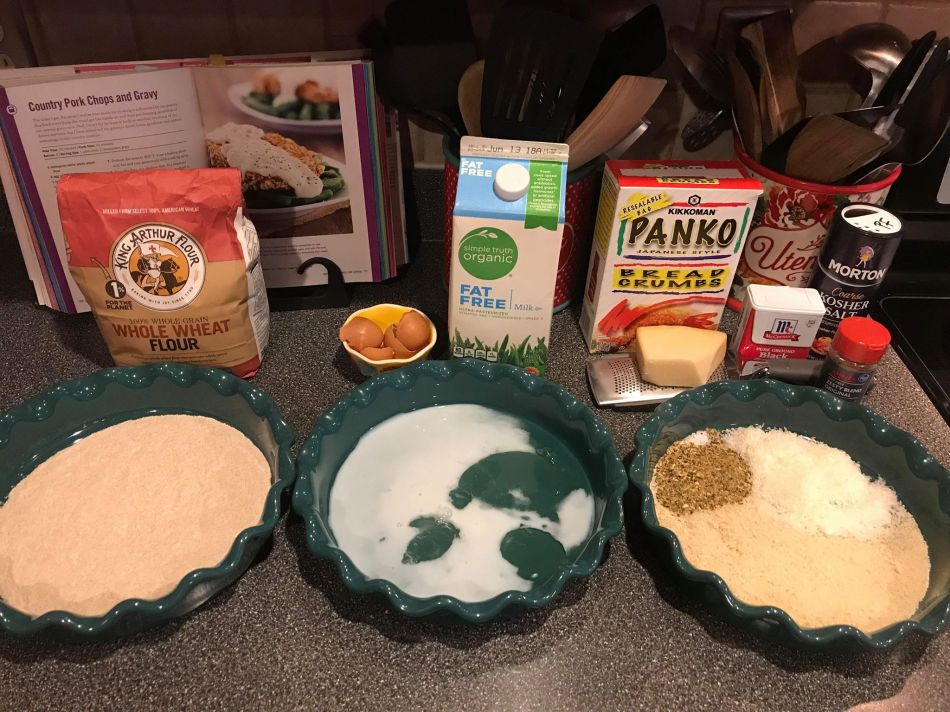 Use a fork to whisk the egg whites and fat-free milk until it is well combined. Then, using your hands, mix the panko/parmesan ingredients in the third dish, well.

Now, working one pork chop at a time, dredge a pork chop in the wheat flour… and give the pork chop a little shake, allowing all the excess flour to fall off.

Followed by the egg/milk mixture… 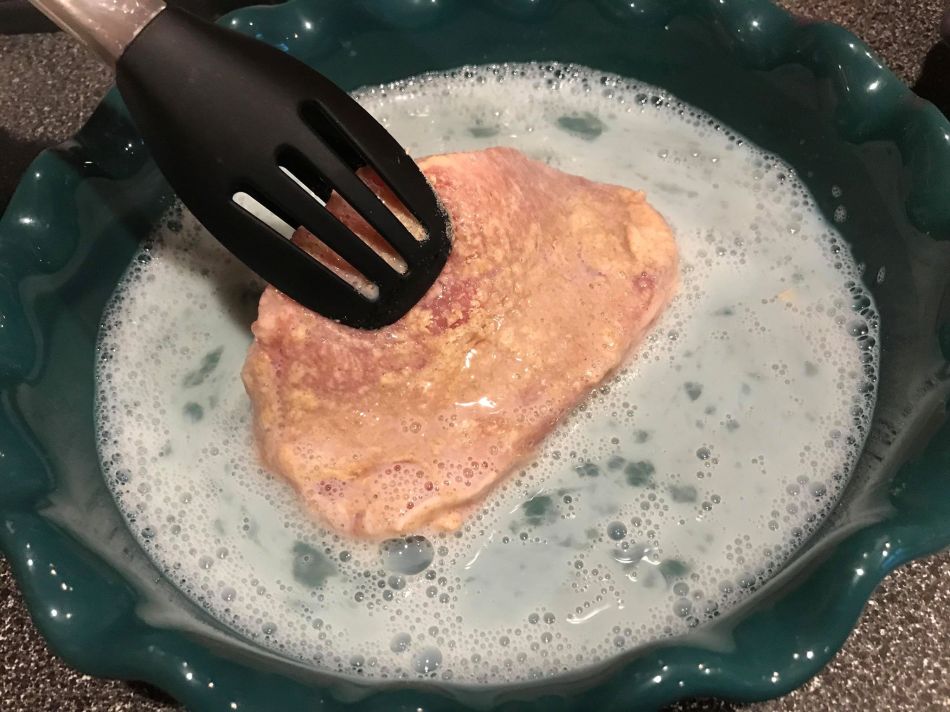 Then coat the pork chop in the panko/parmesan mixture.

Transfer each pork chop to the greased baking sheet. Bake the pork chops for 20 to 25 minutes, or until the internal temperature (measured with a meat thermometer) reaches 145 degrees F… While the pork is in the oven, you can make the gravy! 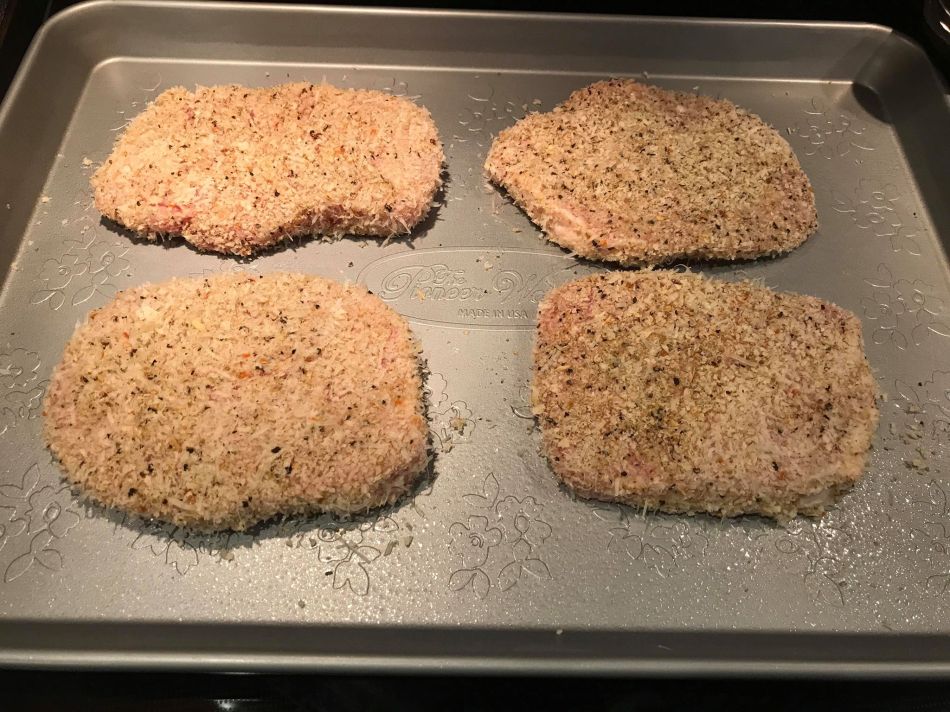 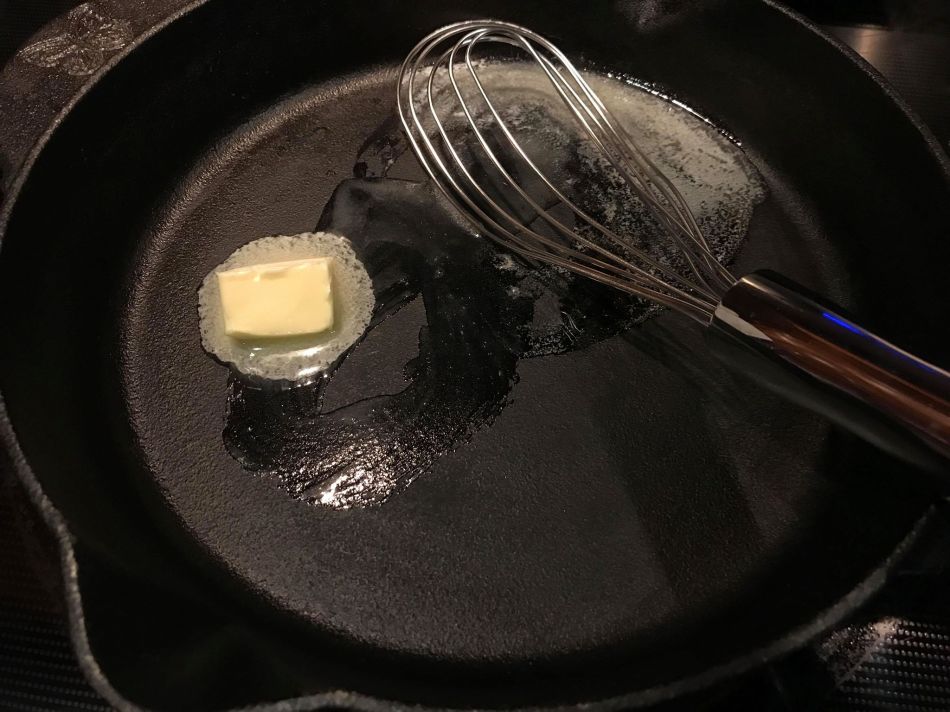 Once the butter has melted, add the 1 tablespoon of Whole Wheat Flour…

Whisk the flour into the butter for about 30 seconds. The flower will slowly start to brown, and you’ll begin noticing a delightful nutty aroma.

Add the 1/4 cup Fat-Free Milk to the skillet, and begin whisking to combine. Turn the heat to medium, and bring the mixture to a boil, continue whisking constantly. 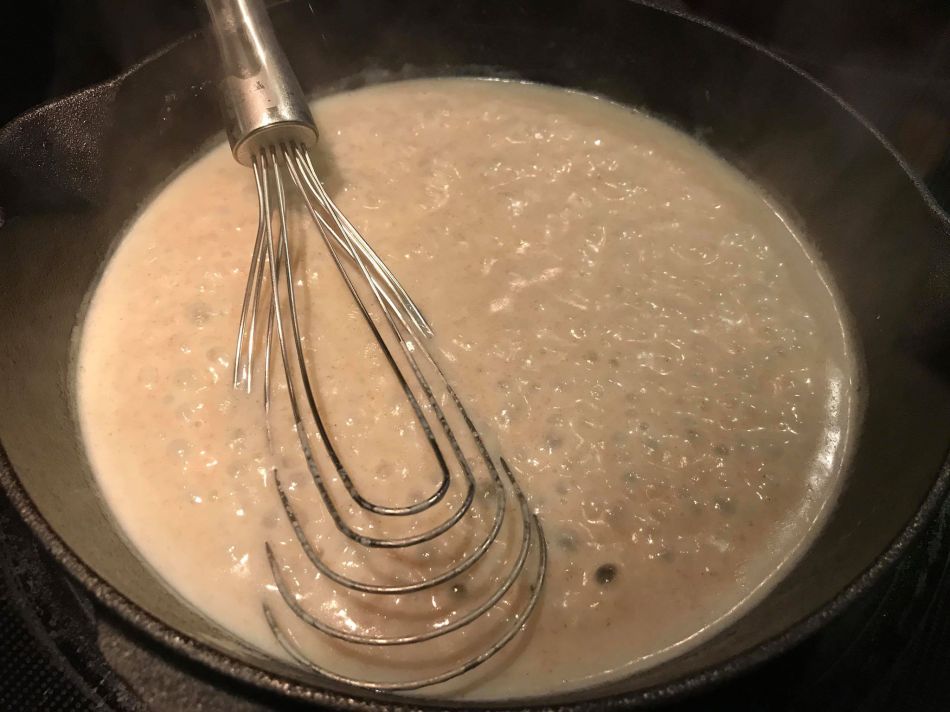 Once the mixture reaches a boil, turn the burner back to low, and add the salt and pepper to taste… Continue whisking the mixture, over low heat, for 5 to 8 minutes, until it is at a desired thickness. Remove from heat, and wait to serve. 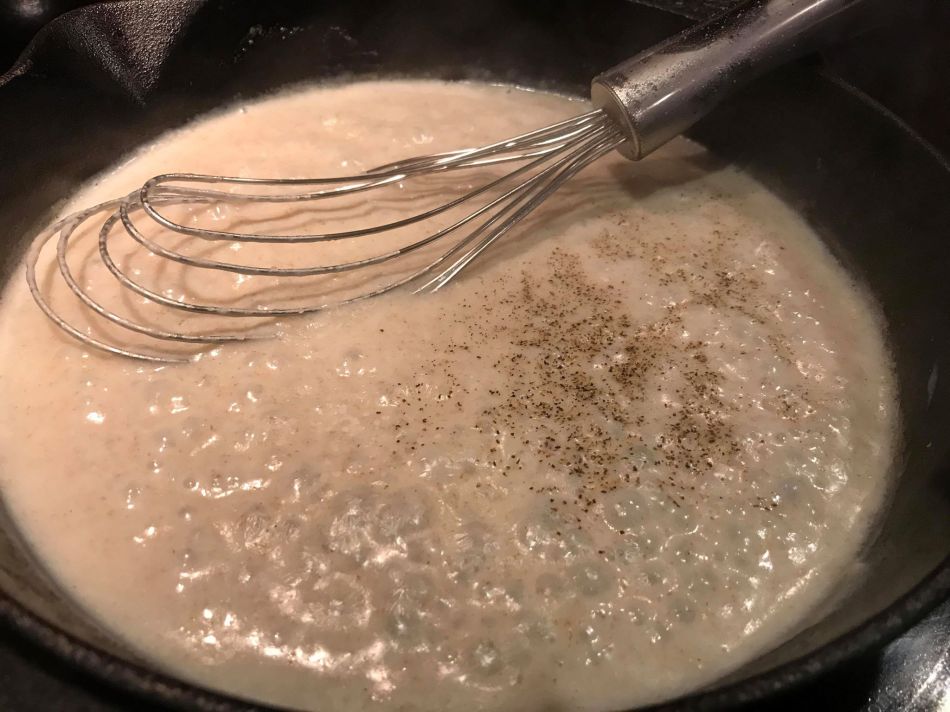 By now, the pork should be finished… Check the internal temperature with a meat thermometer. It should be at or above 145 degrees F. 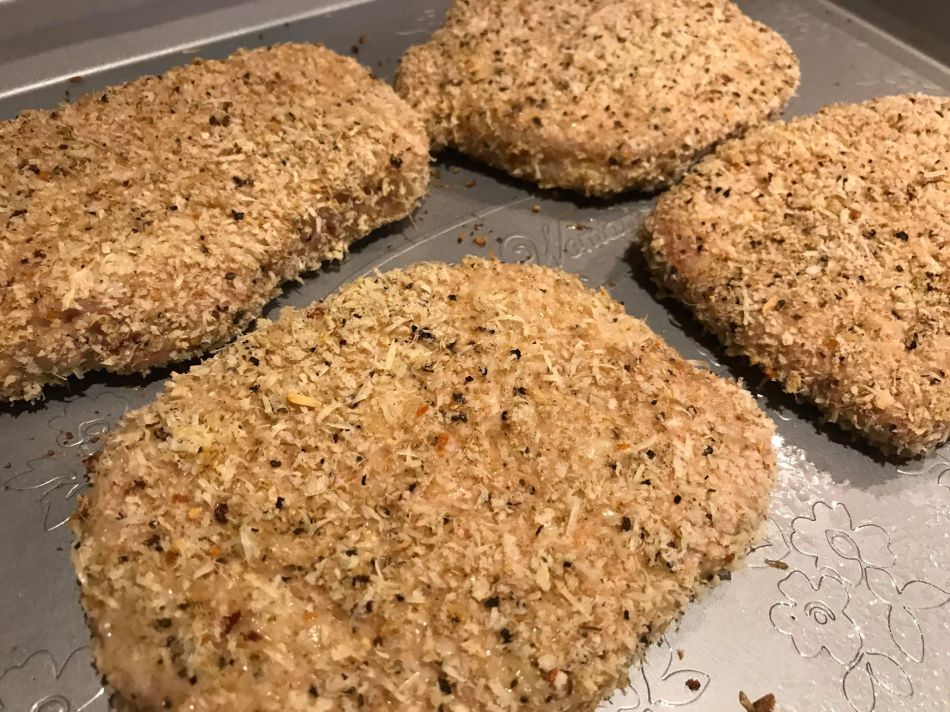 Serve each pork chop with 2 tablespoons of the gravy. I served the pork with Lemony Sugar Snap Peas* (recipe at end of post).

Bonus Footage: I like this recipe so much, I served it for Easter Brunch. 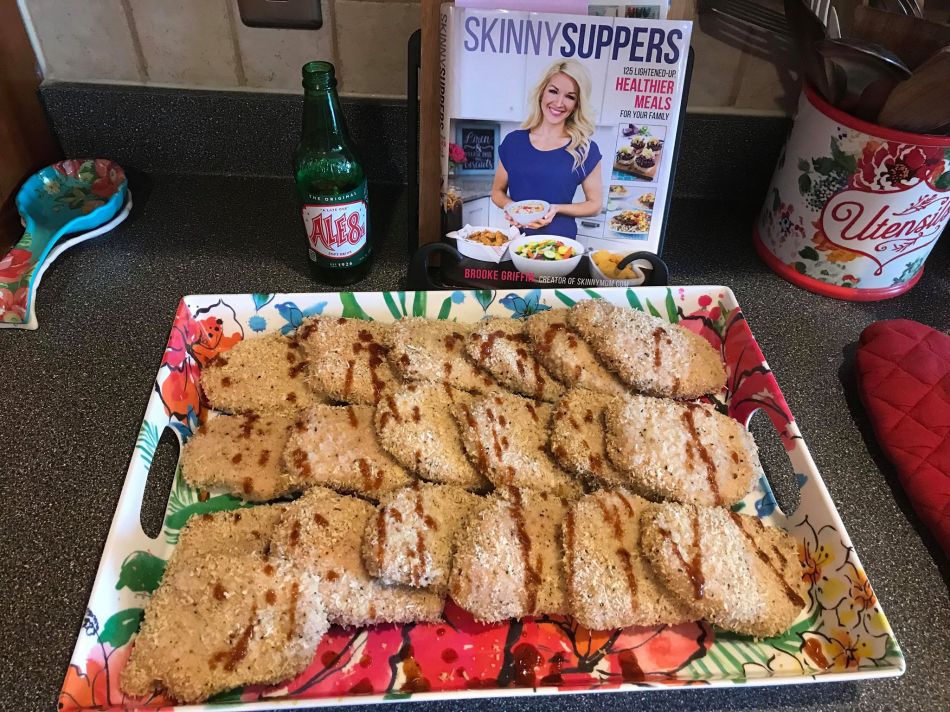 *I absolutely LOVE Brooke Griffin’s SKINNY SUPPERS Cookbook, and I highly recommend you buy it: you can learn about the Cookbook HERE… and you can visit Brooke Griffin’s Blog HERE. Also, this isn’t the first time I’m blogged a recipe inspired by Brooke, check out the following recipes: Zucchini Taco Boats, Baked Beef Taquitos, and Homemade Taco Seasoning.