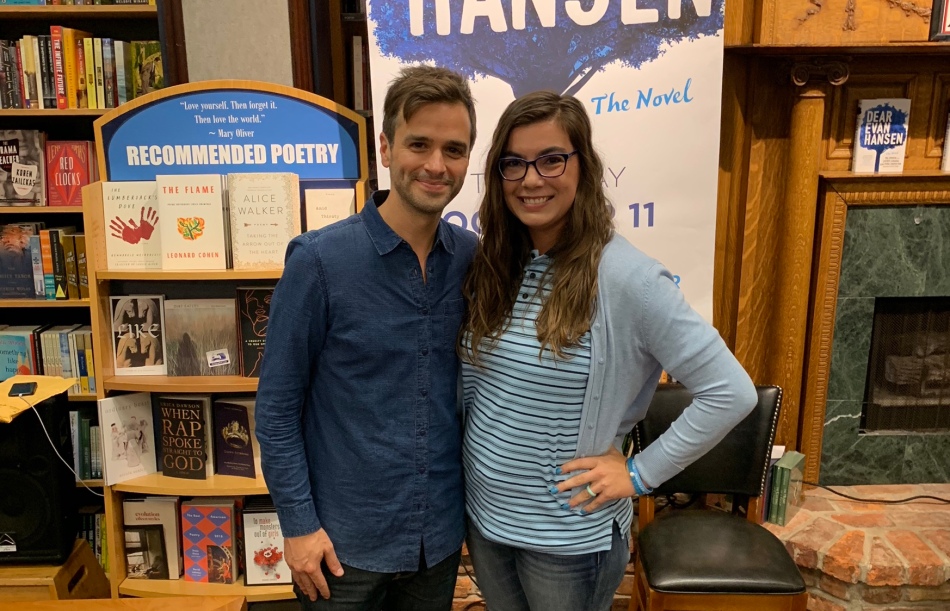 My October: a fun rundown of events attended, films watched, books read, blogs posted, and other highlights, with an important update on my mental health. People ask my thoughts on films, books, and events very often. So, I’m putting everything from October in one convenient place: right here. Enjoy! October was a good month, and here’s why…

Dear Evan Hansen: The Novel Tour
Dear Evan Hansen is my absolute favorite Broadway Musical, and it was recently adapted into a novel, written by Val Emmich. My husband took me to a novel signing so I could meet Val Emmich. Val read from his novel, talked about writing it, performed a few songs, and I totally geeked-out when I met him; I talked too fast, for too long, and said way too much. But he was patient, kind, and so ridiculously amazing. There is something truly remarkable and unique about Dear Evan Hansen. Evan lets us know that we aren’t alone, and that we matter. It’s a life-saving piece of musical theatre, and I’m overwhelmingly glad that I got to meet the novel’s author. 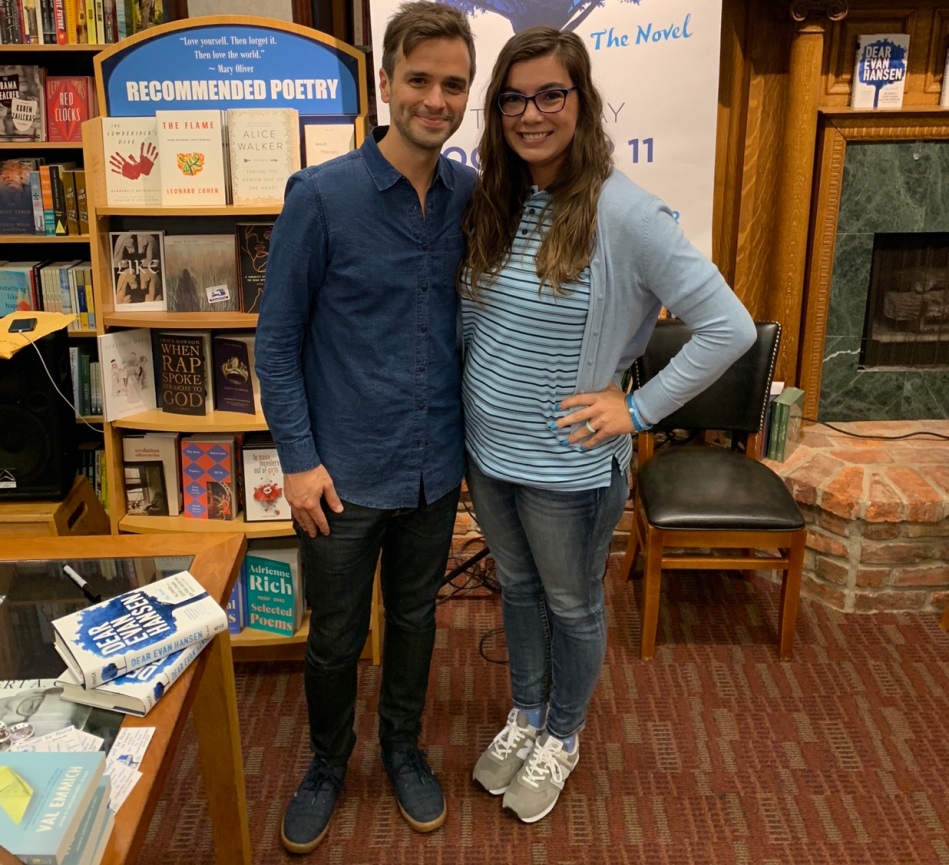 Jeans Spree for 50 Pounds
To most people, shopping for jeans might not be a big deal. But, to me it’s huge. I recently lost 50 pounds, so my husband took me on a jeans shopping spree. My new jeans are geeky and totally fashion-forward. We also had brunch and dinner: it made for an absolutely delightful date day.

A Puppy Found Me
I found a stray beagle puppy while walking my two dogs around our farm. She was pregnant and extremely malnourished, so of course I decided to bring her in. She is very ill, and will need months of constant care, but she is absolutely perfect. She is sweet, kind, well-behaved, and she has every quality someone would want in a dog. As of now, I plan to foster her. I want to help her regain health, and assist her in the delivery and nurturing of her puppies. Hopefully, I will be able to find suitable and happy homes for her, and her puppies, when the time comes.

My Lovely Ladies
Since I posted a photo of my adorable foster puppy (above) I feel inclined to include a Fall photo of my two lovely dogs; Daisy America Mosley-Banks and Charlie Wonder Banks. My dogs love this time of year, and I love watching them love it. 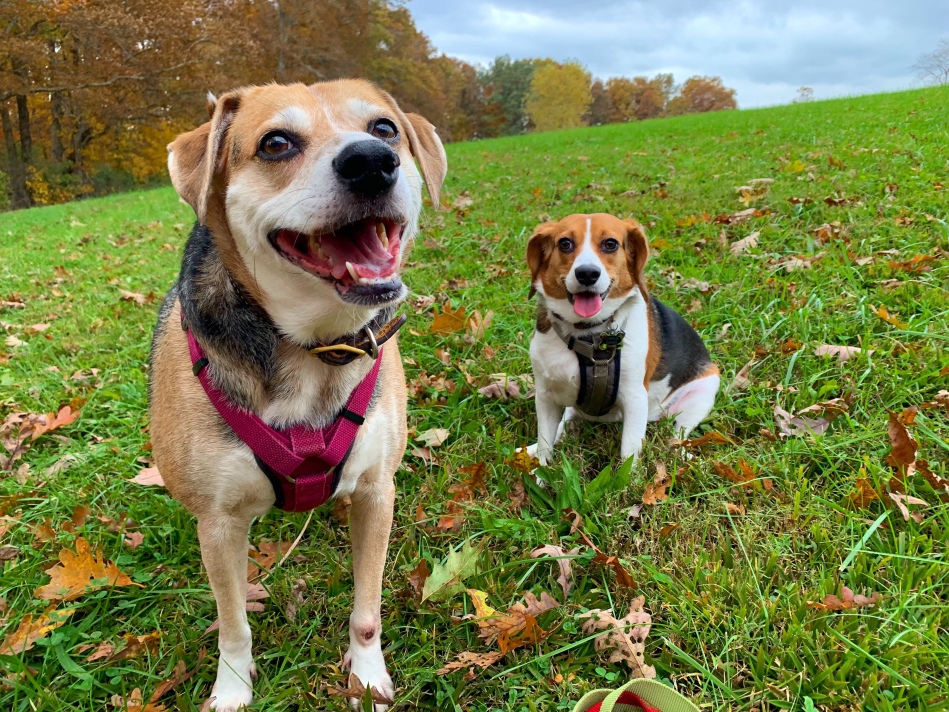 Rain-Delayed Seasonal Changes
Last October my husband and I went to Wicked World Scaregrounds (Halloween themed attraction) with some friends, and it was an absolute blast. This year we wanted to go on opening night, but our plans were hijacked by a rainstorm at the last minute. So, we had an impromptu  board game night. Normally changed plans overwhelm and frustrate me, but to my surprise this was a refreshingly fun and relaxed night. Then, a few weeks later, we revisited the Scaregrounds and had a totally rocking good time. Sometimes, the nights that don’t go as planned end up being the most fun and memorable. Perhaps I could start liking change…

Dear Evan Hansen: The Novel, by Val Emmich
I mentioned my admiration for this novel earlier in this post, when I discussed attending the Novel Tour with Val Emmich, but it deserves mentioning again. Dear Evan Hansen: The Novel is absolutely amazing, and I want everyone I know to read it. I knew I would love this novel, because I love everything Dear Evan Hansen, but it surpassed my already high expectations. Evan Hansen is fictional, but I’ve never “met” someone who understands my mental health and anxiety better than him. I love Evan, dearly. And the best thing about this novel: you don’t need knowledge of the musical to read it. Absolutely anyone can read this novel, and understand everything. So, everyone, go buy a copy and read it. This novel will probably be my Christmas gift to everyone.

Gmorning, Gnight!: Little Pep Talks for Me & You, by Lin-Manuel Miranda, Illustrated by Jonny Sun
I haven’t finished this book yet, but that’s the point. Gmorning, Gnight! is a book of daily affirmations from Lin-Manuel Miranda (creator and star of Hamilton). I read one each morning, and one each night. It’s delightfully amazing, uplifting, and inspirational. I’m so extremely glad that this exists.

Spoilers ahead. Films listed in the order that I saw them.

Venom
I was very excited for this film, but I was also concerned with how Venom would venture away from Marvel’s core material. We’ve already seen one version of Venom (in Spider-Man 3), so I was eager for a completely different version of Venom. I’m relieved to report that absolutely loved Venom. I thought the pacing of the storyline was great, as well as the storyline itself. Like many comic fans, I already knew the origin story of Eddie Brock and Venom, but the film did an amazing job of keeping me invested as I watched the adapted story unfold on-screen. More than anything, I loved watching Venom’s ethical transition from villain to someone with morals. Eddie Brock, although flawed like most humans, is a very ethical guy. Venom, however, doesn’t grasp the same ethical framework. But, through getting to know Eddie, Venom learns ethics; Venom goes through this transition as a result of his love and respect for Eddie. It was fascinating to watch Venom’s ethical transition play out on-screen. Additionally, Tom Hardy was great as Eddie Brock; his performance was ridiculously believable, emotional, and hilarious. Overall, I thought Venom was fun and very refreshing.

A Star Is Born
Initially, I was very nervous about viewing this film, as I assumed it would portray struggles with mental health and suicide. But I absolutely love Lady Gaga and Bradley Cooper, and I didn’t want to miss a film premiere with two people who I love dearly. The film didn’t let me down: I sincerely appreciated how they handled addiction, mental illness, and suicide. Ultimately, I was incredibly moved by A Star is Born. It was an absolute masterpiece of cinema and music, and I still can’t stop thinking about how earth-shatteringly beautiful it was. Also, I had the most unique theater experience of my life after A Star Is Born: The film ended, the credits started rolling, and no one moved an inch until the lights came on in the theater. A room full of complete strangers sat perfectly still until the lights came on. It was absolutely breathtaking.

Halloween
I loved Halloween, but not for the reason I thought. A large portion of this film was dedicated to Laurie Strode’s journey with PTSD, and her obsessive over-preparedness. The audience had to watch how Laurie’s family had been negatively impacted by her PTSD and obsessions. This hit home for me, and it was actually kinda eye-opening. Of course, I’ve never been stalked by a man in a Captain Kirk mask, but I’m very obsessive… and it negatively impacts my loved ones. Seeing Laurie’s journey, and how it impacted two generations of women, was very powerful. Also, as a horror fan, and lover of the original Halloween, I really liked this direct sequel.

Mental Health Support Systems and Communities: In this post I outlined a variety of mental health services, support systems, and online communities. My goal is to show people that they are not alone, and I want to make the process of finding support easier.

I also did some collaborative work this month. As part of my Not Alone Series I conducted an interview with Charlotte Underwood: an author and mental health advocate from Norfolk, United Kingdom. Charlotte’s interview “Finding A Voice to Help Others“, was a remarkable look at mental health and suicide prevention.

Additionally, I published a post titled “10 Unusual Things About Me“, which was both fun and challenging.

My Mental Health in October:

My mental health update is at the end of this post for a very important reason: I want you to see all the awesome things I did before you read about my mental health. As you can see, this month was fun. So, you might be shocked to learn the status of my mental health: Depressed. I’ve struggled with severe functional depression all October, and it’s been extremely difficult. I attended events and socialized with people, but it took a heavy emotional toll on me. There was actually a three-day period this month where I didn’t sleep, not even a small nap, because I had so much depressed anxiety about preparing for events I needed to attend. When I did sleep, it was normally during the day as a result of pure exhaustion, because I couldn’t rest my mind at night. Daily, I ran on fumes and gave every ounce of energy I had to other people. Then, when I was finally home alone I would fall hard into depression, unable to move, eat, shower, or do anything for myself… just anxiously waiting for the next event to attend. Functional depression is a sad fact of life when you’re living with bipolar disorder. I’m ending this month malnourished; I ate a lot, but none of it was good for me. I’m covered in acne; my showers were few-and-far between. My house is a mess; I couldn’t bring myself to clean. The refrigerator is empty; I didn’t have energy to go grocery shopping (my energy had to be reserved for other activities). I’m ending this month with fun stories to tell, but overall I feel bad about myself and my emotional-state during October. Hopefully November will be better. And don’t feel bad for me, I’m sharing this for mental health awareness. My month looks fun, but it was actually very difficult. Mental health matters, and I don’t mind talking about it… Remember, someone may look happy and functional, but that doesn’t negate the fact that they may be depressed and fighting a serious battle inside.

I’ll see you in November. 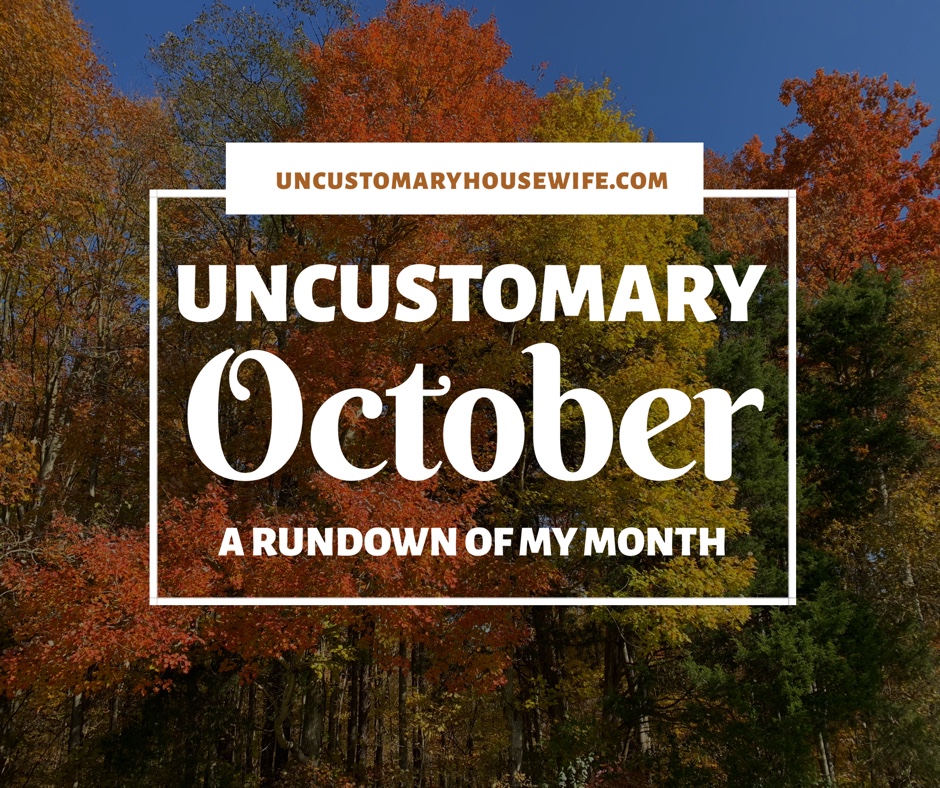 5 comments on “Uncustomary October: A Rundown of My Month”