I sat down with honorable intention; I was going to write about Dr. Martin Luther King Jr. But then I got stuck. I mean, how could I, a regular person, write about a man that that was so strong, persistent, peaceful, and forgiving?

So, I got frustrated and gave up… I shut my laptop, grabbed the TV remote, and retreated sadly to the couch… But then, it hit me. Like a slap across the face. Literally… My dog’s tongue hit me right on the cheek… and in that moment, as I looked into her big brown puppy eyes, all my sadness and frustration went away. Then I realized something; my dog personifies the teachings of Dr. Martin Luther King Jr. more than any person I know. So, I’m going to explain it to you, using three main points; Character, Faith, and Love.

REASON 1: CHARACTER. My dog, Daisy, has met people from all walks of life. Some of them she welcomed into her home, and some she met outside in the world; she’s seen wealthy people, poor people, and even homeless people, she’s encountered Native Americans, African Americans, Caucasians, Asians, Latinos, and countless mixed race individuals, she’s met many homosexuals, many straight people, and even a couple drag queens, she’s met preachers, priests, Orthodox Jews, Muslims, Christians, and atheists, she’s met solders, veterans, and anti-war protesters, she’s seen Republicans, Democrats, Libertarians, and even a couple politicians, she’s met criminals, and drug addicts, she’s met healthy people, and very sick people, she’s met the young as well as the elderly… And guess what? She never once noticed a difference in any of them. She greeted them all with the same open-hearted kindness and optimism. With the eyes of someone that truly didn’t care about color, sexual-orientation, income, religion, etc… With the eyes of someone that truly believes that all living things have goodness inside them—a goodness that is imbedded in their character. And sure, Daisy has met people in her life that have scared her, but she has always given them a chance. As Dr. King said; “I look to a day when people will not be judged by the color of their skin, but by the content of their character.”

REASON 2: FAITH. My dog, Daisy, believes in me, she has faith in me, just as Dr. King said; “Faith is taking the first step even when you don’t see the whole staircase.” I honestly believe that Daisy would follow me to the ends of the earth, literally to Hell and back, if she needed to… and a few times it has felt like we’ve been to Hell and back together. But that’s not the point, here’s the point… I read a story once, a long time ago, in the story a little boy tells his father that he was scared of Heaven because he didn’t know what it would be like. So, the father took his son into a room of their house where their pet dog had never been, and he closed the door behind them leaving the dog on the outside of the door. The little boy was confused, but then the dad said; “watch what happens when I open the door”, and when the dad opened the door the dog immediately ran inside the room to the boy. The dad then looked at his son and said, “the dog has never been in this room, but when the door opened he ran straight in, because his master was inside… and that, my son, is why I am not afraid of Heaven, because I know my Master is waiting for me there.”

REASON 3: LOVE. Daisy is incapable of rationalizing hatred, she doesn’t hold a grudge, or seek to get revenge. Yet, she understands unconditional love more than anyone I’ve ever met. I wish, as her parent, that I could have sheltered her from all pain throughout her life; but Daisy has seen hatred, cruelty, sorrow, and emotional darkness. However, she personifies Dr. King’s quote; “Darkness cannot drive out darkness; only light can do that. Hate cannot drive out hate; only love can do that.” Daisy pushes through everything with love and positivity. Even in times when I am in emotional pain, or when I’m experiencing hatred or anger of my own, she has always been there to spread light and love, because “hate is too great a burden to bear”.

IN CONCLUSION… My dog, Daisy, is my role model… and she is more like Dr. King than I will ever be, though I try.

IF THIS OFFENDS YOU… I’m aware that there are people who will take offense to this post; “Comparing a dog to MLK Jr., how dare she!!”… And yes, I am very aware that Martin Luther King Jr. was a trailblazer who lead the March on Washington and the Montgomery Bus Boycott, who served as president of the Southern Christian Leadership Conference, a man whose non-violent protests lead to the passing of the Civil Rights Act of 1964, Voting Rights Act of 1965, and the Fair Housing Act of 1968, and so much more beyond that… I’m also aware that my dog is just, well, a dog. But let’s be honest, if everyone in the world was capable of loving, forgiving, and caring like a dog, then the world would be a much happier, Martin Luther King Jr. type, place. 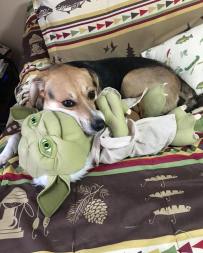 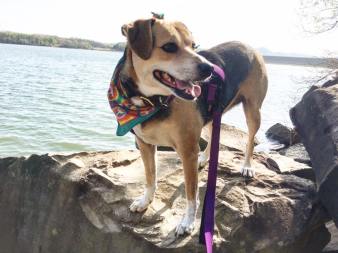 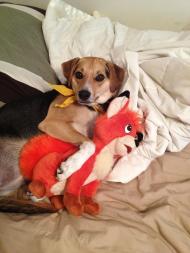 5 comments on “My Dog and Martin Luther King Jr.”